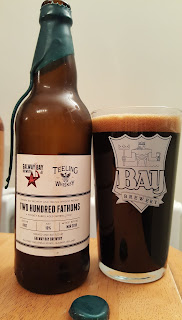 It's not often that a vintage beer comes with a warning from the producer to drink up, but Galway Bay issued one such notice to holders of Two Hundred Fathoms older than 2017. I don't need to be told twice so got stuck into this bottle of the 2016 vintage.

I'm really not sure I believe the brewery, though it's possible that this is in peak condition because it is gorgeous. There's coffee and liquorice and tar and all the stuff that makes big and serious stout worthwhile. But there's also sweeter and happier chocolate, cherry, cola and hazelnut: basically everything that's dark and lovely about beer. I genuinely didn't notice it was barrel aged as there's no whiskey gimmickry or burn; all is smooth and integrated and eminently drinkable.
All that leaves me wondering what the panic is. Oxidation? Autolysis? Because there is zero sign of anything going wrong, as far as I could taste. Mind you, this was a stunner when it was fresh on tap, so I could well believe it isn't improving. But at the same time, if you're holding some, I don't know that I'd be in a big rush to drink it. Though you should definitely drink it.

Brewery clarification incoming: it's an autolysis thing. Since the introduction of a centrifuge, there's much less chance of that happening to the bottle in your stash.
Posted by The Beer Nut at 11:28 pm