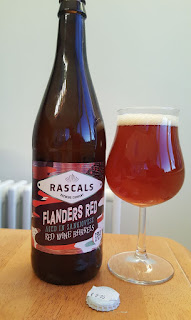 Travel to Belgium is off for the next while, so we take our Flemish reds where we find them. This one from Rascals, brewed at their old brewery, now transferred to Lineman, was 6.4% ABV when it first appeared on draught. I said at the time that cellaring would improve it, and when bottles appeared shortly afterwards, the ABV bumped up to 7.5%, I bought one and did just that. Unusually for beers appearing on this blog, it wasn't aged in my temperature-fluctuating attic but has been at the back of the beer fridge for two and a bit years.

I had to go back and read why I thought this needed to be aged. It seems the sourness wasn't sufficient -- it was all herbs and fruit and lacked tartness. Well that has definitely changed. It's gone full-on Flemish with a sharp and savoury tang that's not quite vinegar at this stage but is headed in that direction. It's a waxy twang, with lots of oak and a hint of saltpetre, showing definite attributes of Belgium's finest sour beers. The cherries, herbs and balsam resins are still there in abundance, and there's a thick boozy kick which interferes with things a little but is to be expected given the strength.

This was a very worthwhile experiment. The beer has really come into its own in its time in the fridge, much as I hoped it would. It is no longer an Irish approximation of a foreign style but something that genuinely tastes like it was aged in big foeders in a brewery that's been doing this sort of thing for decades. All you need is time.
Posted by The Beer Nut at 11:10 pm No comments: 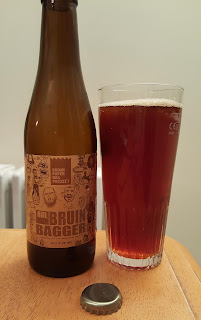 The Brown Paper Bag Project, an offshoot of L. Mulligan Grocer the pub, had this brewed at 't Hofbrouwerijke in Belgium as a tribute to local animation studio Brown Bag Films. It ended up being the Project's last packaged beer, and some time after the Project itself was wound up, bottles were still appearing in my local supermarket. After a few weeks of looking at them, I rescued a handful, thinking they might age well. Today we start finding out how accurate that was.

It still has the beautiful sour-sweet cherry aroma enticing the drinker in. The flavour is very much cherry driven, still tasting fresh and real after all this time. For the first few sips, it tasted much as I remember the beer originally. Could it be so robust as to undergo no change at all? No. I think this has mellowed somewhat. It was never a vinegar bomb as such, but I think age has left it less acidic and more fruit-forward. Something for us all to aspire to. There's a black pepper spice too, which I think is new. There's no oxidation, no autolysis: no off-flavours at all.

I'm taking it that this is a beer still on the upswing, and I find myself wishing they'd done it in 75cl bottles. Tempting as it is to lash into my remaining bottles, I think I'll leave it a while before the next one.
Posted by The Beer Nut at 11:05 pm No comments: 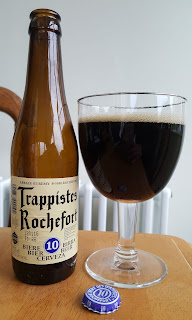 Just a quick check-in at the Rochefort farm. This vintage of Rochefort 10 featured in an early Stash Killer! post back in 2016. I was charmed by it at the time; let's see how another four years has treated it.

Maybe it's my failing acumen, but the aroma seems less lively than I remember: still with the concentrated dried dark fruit -- raisin and fig -- but I needed a full lungful to get a proper impression. The fizz is still busy and the body full. The flavour has turned a little bitter: I get a whack of herbal liquorice and a pinch of ginger spicing, almost like some cod-Victorian medicinal tonic. The cough-syrup thickness helps that effect. I noticed chocolate and cake in the five-year version and that's gone from the nine; this is more sour than sweet. There's nothing too extreme, though, and smoothness is still the watchword. There's no trace of any bacteria or wild yeast activity, no oxidation, autolysis or any of the other bad things that happen when beer is aged. It still tastes proper.

Rochefort 10 is real a performer when it come to cellaring. If my haphazard treatment is yielding results this good, anyone can do it.I don't know that the 10 is getting better, but it's different from before, and still very enjoyable. Next time out I should have a fresh one to hand for comparison.
Posted by The Beer Nut at 6:05 pm 2 comments:

Email ThisBlogThis!Share to TwitterShare to FacebookShare to Pinterest
Labels: rochefort 10 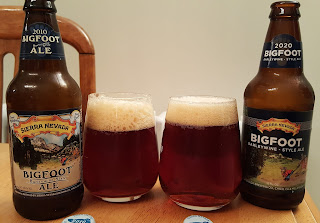 It's a while since Sierra Nevada Bigfoot has featured here. Back then, I drank three vintages four years apart and concluded that they weren't that different, from year one back to year eight. With another four years on the clock it seems reasonable to try again, this time picking two bottles that are ten years separated.

They look fairly similar: a rich and clear shade of red, though the older one fizzed more and piled up head as it poured, suggesting that fermentation has been active all this time. But I started with the fresh one, to set a baseline. That heavy, sweet, red liquorice rope and cherry effect that is young Bigfoot hasn't been changed this year. There's a dry edge to it, and the bitterness is toned down more than I remember. Normally I wouldn't recommend drinking fresh Bigfoot, but this is really quite nice.

How does it compare with a ten-year-old bottle? The aroma is completely different, for a start. 2020 has virtually none but 2010 shows a rich warm port-like character that I forgot is an essential part of Bigfoot. 2010's flavour has definitely dried out, and there's a strong kick of stewed tea about it. That's not unpleasant, however, and it it makes it more approachable and less boozy. There's a cough-syrup element that's unsubtle but quite enjoyable, and that doesn't seem to feature in the new one.

I think they've changed the Bigfoot recipe. Time was, the fresh one was verging on undrinkable for year one -- too heavy on the bitterness; now it's actually quite pleasant and mellow. Ten years down the line, that intensity has calmed down but remains in the slightly acrid dryness. Of this pair I think I enjoyed the 2020 more, which was not the plan. I guess it's time to reset the experiment and see where Bigfoot is at come 2030.
Posted by The Beer Nut at 10:38 pm No comments:

Email ThisBlogThis!Share to TwitterShare to FacebookShare to Pinterest
Labels: bigfoot 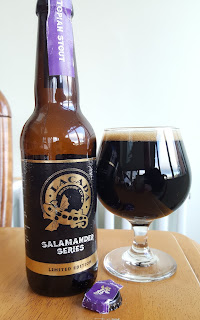 "Limited Edition" says the label. It's something of a habit among breweries to take a recipe intended as a one-off and put it into regular production. Such has happened with this imperial stout from Lacada, now available in a full half-litre. But today I'm going back to its roots as no. 1 in the Lacada Salamander Series of experimental beers. "Best before 15/02/2017", we are advised.

It crackles into the glass thinly and I feared for the beer's smoothness, wondering if some wild fermentation had attenuated it down to thin vinegar. Thankfully not: it's still satisfyingly chewy. The various fruit, candy and cocoa flavours have melded together into a single floral-spicy taste: part cola, part Kola Kube, with a backing of tar and tobacco. A tang of hop bitterness stops the dark malt from running away with it completely. Best of all, there are none of the signs of wonky ageing: no oxidation or autolysis, all is mellow and easy-going.

I'm not sure if this one warrants further ageing. The off-flavours mentioned above could be primed to develop at any moment, and there's enough of a difference between this and how it originally tasted for me to feel I got my money's worth out of the cellaring. If you have one, get it open now, say I.
Posted by The Beer Nut at 1:39 pm No comments:

Email ThisBlogThis!Share to TwitterShare to FacebookShare to Pinterest
Labels: utopian 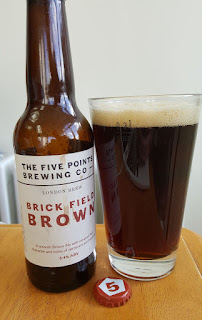 Today's beer never actually made it into the stash. It was acquired quite recently as part of a cellar clear-out at UnderDog and I suspect it's a leftover from the Five Points launch event they hosted in February 2018. It was bottled in November of the previous year and has a best-before of just over seven months ago. I reckon that's about long enough to be considered vintage.

In my original review I complained about over-carbonation. It's always a risk with an unfiltered and unpasteurised beer like this, that it will get worse with age as the yeast keeps on chomping through the sugars. But it poured evenly and easily, forming a slim off-white head over the deep chocolate-brown body.

It's still very dry, showing a wheaty breakfast-cereal crunch with the vanilla and cocoa powder of mid-range milk chocolate. The texture is pleasingly soft, which was definitely not my experience last time out, and there's a pleasant cherry or strawberry jam note which wasn't there before.

I think Brick Field may be a good one for ageing, longer than this bottle got, and my bottle certainly hasn't got worse since it was fresh. The beer is robust enough to add complexities as time goes on, and so long as it doesn't dry out totally, there could be something fun yet to emerge. Don't touch that bottle-opener!
Posted by The Beer Nut at 8:04 pm No comments: 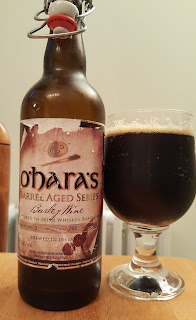 In a change to the usual procedure, this post is about a beer from someone else's stash. I was given this bottle by Brendan yesterday in payment for some enjoyable consultancy work. Strictly speaking I haven't reviewed it before: the link above is to the original non-barrel version at 7.1% ABV, before it got 90 days in an Irish whiskey cask. I think I did taste this edition at some point, however, and wasn't terribly impressed.

If that's the case then time has been good to it. There's a genuinely vinous richness, packed with plump juicy raisins and sweet plum. I got a layer of velvety chocolate too, more suited to a porter than a barley wine but inarguably delicious. The whiskey character, if there ever was one, has faded to almost nothing, just a slight note of oaky vanilla. A very mild beefy autolytic twang is the only sign of wear and tear, but it's so slight as to be all but imperceptible.

This isn't terribly complex, and I was expecting more going on, given the ageing, the strength and the extended cellaring, but I'm very happy with how it turned out. It's smooth, mellow and very tasty. Well worth a pop if you have one stashed.
Posted by The Beer Nut at 9:12 pm No comments: