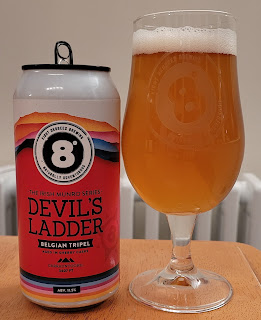 I do like it when someone else does the cellaring for me. Eight Degrees sent their annual seasonal gift package during the week (thanks folks!) and along with the recent releases it included one from a year ago. The base of the can tells me that this was packaged on 3rd December 2020 and therefore is best before 3rd December 2022. Throw it out to the beer bloggers, sure. They'll drink anything.

I wasn't expecting a canned tripel (aged in sherry casks) to have changed much in a year, especially since the brewery was most likely storing it correctly through the summer. I said it was clean and crisp and boozy, originally, with notes of mead and dessert wine. And I think it has changed a bit, reverting to something that tastes much more like a typical tripel. The sherry is still there in the aroma but it doesn't make much of a contribution to the flavour. I get banana esters primarily, and then honey (not mead), clove and cinnamon. As it warms, a growing toffee backbone emerges.

The difference with the fresh version, or at least my notes on it, was surprising. I guess the general rule that pale beers aren't enhanced as well with time as dark ones holds true for tripels also. This seems to have lost some of its delicate complexity. It's still perfectly serviceable, however, so enjoy it if you have one, but maybe don't sit on it too much longer.
Posted by The Beer Nut at 3:17 pm